The manufacturing process of a photovoltaic module is composed of several phases, in today’s article, we will see two of them, the taping and the interconnection between the solar cells.

The front grid of the cells is composed by the “fingers”, which are the ones that collect the photogenerated current in the cell, and the “bus” that is the current collector where all the fingers are connected and which conducts the current to the outside. 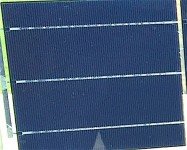 The taping of the cells consists of soldering on the front surface three/five of tinned copper strips, as can be seen in the image of a cell of a real module, although in the current market it is usual to find solar panels with 5 Bus Bar instead of three, with performance improvements.

In this process the cells are interconnected in an off-grid solar module, for example, such as the 12V Futura FU150P solar panel, normally 36 cells are placed in series, but there are other modules, generally for self consumption and on grid connection, such as SolarWorld Sunmodule SW 290 Mono, which are placed 60 cells, or even there are 72 cells, such as the FuturaSun FU300P.

In any case, the interconnection process is always the same, ie the two / three or 5 strips that are on the front face are connected to the back side of the next cell and so on. Usually 4 strings of 9 cells are made, in the case of 36 cell models, 3 strings of 20 cells in case of 60 cells, or 3 strings of 24 cells in case of 72 cells solar panels.