Permanent stock of solar panels in our warehouse, in addition to technical service for our clients

Our company activity is the solar panels sale and supply for all type of pv systems such as home and industrial solar panels systems for net-metering and/or on grid projects.

We have been working as pv panels suppliers since 2007 in Spain, Portugal and the rest of Europe and worldwide, always differentiating from others by the quality of the products we work for and the personalized service we give to all our customers. We are official distributors of probably the three best solar panels manufacturers on the market:

The solar modules we have for sale, are mainly polycrystalline and monocrystalline solar panels, and also Mono PERC and the exclusive technology Sanyo HIT. Any of these technologies is suitable for pv projects of self consumption, on grid and also for isolated installations with batteries.

If you need a price of solar panels for your system in your home, or for all types of buildings with energy demand, any of the manufacturers in our catalog is suitable for this function. All of them were selected by our technical staff as the best solar panels quality and this means the best performance for your solar panel system.

How do solar panels work?

The manufacturing process used in the development of solar modules is relatively simple. Basically, pv panels are composed of the following materials:

Well, that’s about the materials that are made the solar modules. But how is the manufacturing process ?, we explain:

Once the solar cells have been connected to each other, they are placed between the layers of the EVA same like a “big sandwich”. This set is introduced in machine, which is a kind of “giant sandwich maker” that it does is cause the EVA to end up forming a protective assembly sealed around the solar cells. It is like, if we make a simile, like plasticize a paper, it is totally sealed forming a single set.

It is important to note that this lamination process is one of the most important in the manufacture of solar modules. It is a slow process that requires very strict waiting times because it is fundamental that the EVA ends up becoming a kind of gel that surrounds the whole set of solar cells and does not present future problems of delamination, water leaks etc. This step is one of those that determine a good performance of the pv panel and, for example, many Chinese solar panels do not respect these times and for this reason they present so many problems after 3-5 years of operation.

Once the lamination process is finished, the aluminum frame is placed to protect the panel from impacts and to facilitate its assembly, the Tedlar to protect it from the back and the junction box. Somehing like the following solar panel cross-section picture:

As we can see in the previous image, the junction box is located at the back, from where the interconnecting terminals of the set of solar cells with the outside come out to connect them with the solar inverters, solar charger and so on. Usually the positive and negative poles are marked and inside it, protected by a silicone encapsulated, are located the protection diodes (bypass). The junction box is another of the critical points of the pv panels.

We must think that this is the point where we connect the panel with the rest of the pv system, so the junction box quality is priority. As we mention, inside the junction box are so-called Bypass Diodes, whose mission is to avoid the effects that are produced by the hot spots and shadows, that can negatively affect the performance of the panel.

A hot spot occurs when in some of the solar cells, one or more of them, have some manufacturing defect or is partially shaded. When this happens, the shaded solar cells, instead of generating electricity, dissipate a high power equal to that generated by the other cells that do not present the problem. As a result, the so-called “hot spot” phenomenon that will eventually destroy the cell and the panel will heat up. To avoid this, these diodes called “Bypass Diodes” are placed in parallel with a the cells connected in series, generally one diode for each group of 20 cells in series.

Among all the data and specifications about pv panels that can be found in the current solar market, the most important ones that we must know for a correct calculation of any pv installation are:

The solar modules generates electricity as a function of the incident radiation. The greater solar radiation, the greater the production. We can appreciate it in the following graph: 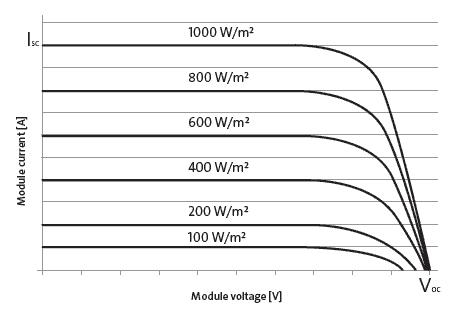 It can be seen over, as a function of incoming solar radiation (measured in W / m2) the solar panel generates more or less current, the voltage being almost constant, for that reason, to greater current and, consequently, higher radiation power. It is true that temperature also plays an important role, because for each degree centigrade that exceed 25 ° C on the surface of the panel, production is reduced by about 0.4%. Therefore, the ideal situation is always low temperatures and sun.

Finally we can not forget to mention which are the types of solar modules that are commercialized today. Basically we should talk about monocrystalline and polycrystalline solar panels, since they cover almost 90% of the current market. As basic information about these two types of modules, we can say:

Monocrystalline is always more efficient than polycrystalline, but also its price is always little higher. Choose between one or another type of technology is always always depending on the type of project, the investment that wants to be made … etc.

If you need an offer or know our pv panels cost for your pv system, or also our technical support, do not hesitate to contact us. We will advise you with the best option for your project and we will send you our best proposal without any compromise.