Panasonic (Sanyo) pv panel sale, model N325 HIT (VBHN325SJ47) with HIT solar cells with the highest performance of the pv maket. We are official distributor of Panasonic Europe, with own stock and technical service for our customers.

Documentation related to the product:

The N325SJ47 pv panel has a product warranty of 25 years. It is composed of a total of 96 high-performance HIT cells (the highest efficience on the pv market) and has a panel efficiency of 19.4%.

It is a solar module for on grid pv systems and self consumption where the available surface is limited and a panel with high efficiency is necessary to take advantage of the surface. 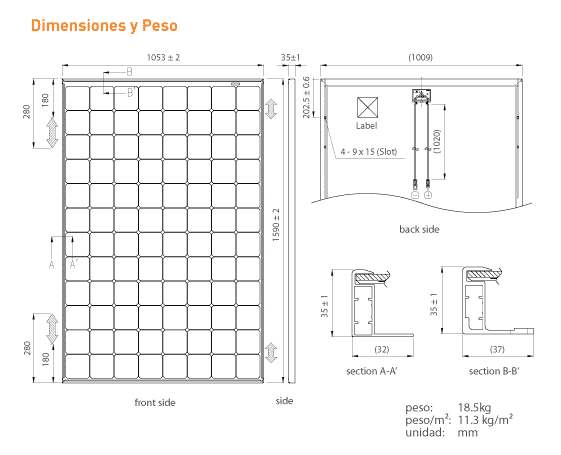 Best performance in the world:

High efficiency even at high temperatures:

It is known that one of the biggest enemies for a solar panel is the temperature. A solar panel decreases its performance for each degree centigrade above 25 °C generated on the panel surface. Typically this phenomenon, which is valued with the temperature coefficient, is usually -0.45% / ° C, for example, for each degree that rises from 25 °C the panel loses 0.45% of its power.

This happens very often in warm countries such as Southern Europe and South America, Africa … where it is very common for a panel to reach 70-80 ° C temperature on its surface and that drastically reduces energy production in the central hours of the day, when there is more radiation but also more heat.

In the image above we can see a real example of a pv installation in Osaka (Japan) with a measurement made in the month of August. The image on the left shows a power chart of a Panasonic HIT solar panel compared to a standard solar panel. As you can see, HIT technology achieves 13% more power in the central hours of the day.

The heart of each Panasonic HIT solar panel is the HIT solar cell developed by Sanyo in 1990 as an improvement on the classic monocrystalline cell, using different materials than a crystalline wafer in the p-n junction.

The heterojunction cells HIT have been continuously breaking records of efficiency and performance at high temperatures and, In March 2016, Panasonic set the record for efficiency of a solar panel in commercial size with a panel of 275W (aperture area of 1.1562 m2). 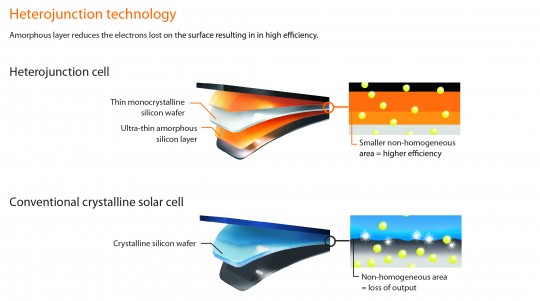 Panasonic is one of the most experienced companies in solar technology starting in 1970s, when the solar modules were developed and sold under the SANYO brand. Since that date, more than 3 million modules have been sold and installed in Europe alone.

HIT technology is highly efficient and produces more power per square meter than traditional products – up to 28%* (As compared to the average efficiency of 120 different modules on the European market; benchmark values for selected solar modules according to manufacturers’ catalogues, December 2009) more. This means that you will need fewer modules on your roof to accomplish very high performance.

If you need a quotation about this excellent premium solar panel Panasonic N325 HIT, don´t hesitate to contact with u

Our sales team will support you with all that you need.