Solar panel manufactured in Asia or Europe? – What comes out most profitable?

Sub-Menu
SunFields » PV Panels » Solar panels: Made in China or Made in Europe?

For years we have witnessed the mentioned dichotomy, price or quality ?. In Southern Europe, for some reason, the price is the king, the cheaper the better and the quality is in second place. There are also people who ask us about quality and price … does that exist? We ask ourselves …

This is the reason for the experiment with solar panels that was put into practice this year 2017 in Portugal. An installation with two inverters, in the same place, same orientation …. Etc but with two very different solar panel brands. One of them is a “German brand”, but it is actually made in China (it is very common these days to try to cheat the customer with a German name but being an Asian manufacturer) and the other brand, a brand German and 100% made in Germany.

The result ?, we will see next but we anticipate that the result is very striking, but also expected.

2 – General data of the photovoltaic installation:

Installation (A): 15kW of solar panels “German brand” but of Chinese origin

Installation (B): 15kW of German solar panels made in Germany

Location: Lisbon region, Portugal (No more accurate data are provided to preserve the privacy of the owner of both facilities)

That is to say, we have two exactly identical pv plants, in the same location, with the same orientation, same inclination … etc. Even the installer who made both systems was the same company.

3 – Straight to the point: Production and comparison data

Well, as we say colloquially, “let’s go to the trouble”, and as to learn to swim say that it is better to jump into the pool, here is a first screenshot production last September 2017:

Do you guess which color corresponds to each installation ?;

We will see everything in more detail with a table of productions of the month of June 2017 of each system, as well as the difference of production in kWh and in% between both facilities.

In the end this is the fundamental and what should concern us:

“It seems clear that, generally speaking, the higher the panel quality, the better the production results. But is it more profitable? “

Well, let’s now look at the same table but with the kWh / kWp ratio, ie how much energy is generated in each of the facilities for each kWp installed: 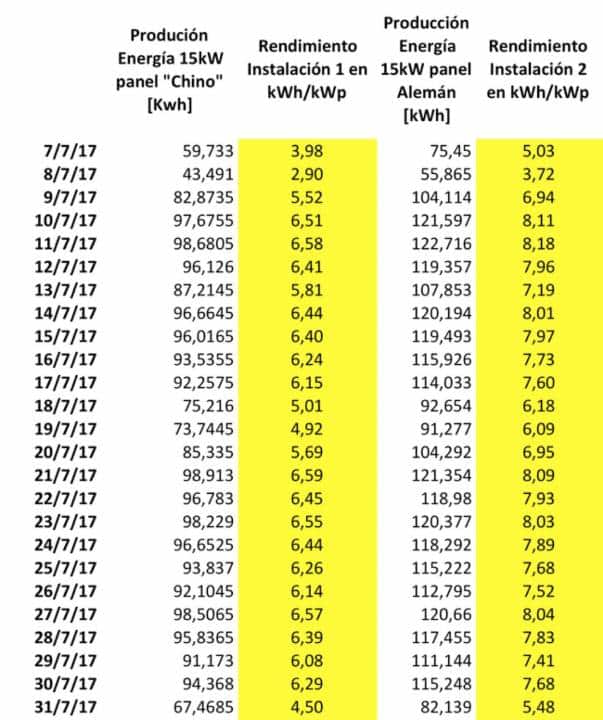 This, the kWh / kWp ratio is the fundamental data that must always be taken into account when calculating the profitability of an installation, and NOT the price of the panel Wp.

A photovoltaic plant is an energy generation system, ie such an installation is more profitable the more energy we can generate with the same amount of installed power.

We explain it with a more “visual” example:

Mr Schmidt has bought an electronic device, made in Germany, which helps him to save 3 hours a day of electrical consumption.

Mr. Chen has bought the same device, made in China, something cheaper, but that helps him to save 2.5 hours a day of electrical consumption.

In the end, Mr. Chen has saved a few euros but after a year Mr. Schmidt has saved 182.5 hours of consumption more than Mr. Chen.

Going back to the case at hand, a photovoltaic installation should work for 30-40 years. That is to say, it will generate energy during all the days of its useful life, that if we put that they are 30 years, we speak of 10,950 days producing, and for each of those 10,950 days we can choose to pay something less for a panel cheaper and have a “normal” production, or choose a higher quality material and produce 10-15% more on average each and every 10,950 days than if we had chosen the other cheap option.

As is often the case with almost everything we buy in everyday life, the best and most satisfactory results are usually achieved with the highest quality materials.

In the end, considering that a photovoltaic system measures its profitability according to the energy produced (kWh) per kilowatt installed (kWp), it turns out that it is always much more profitable a panel of maximum quality, although the initial investment.

The data of both manufacturers have not been disclosed to protect the privacy of the owner of the photovoltaic installation under study, but we are able to inform that they are 2 of the brands of solar plates more known and used in the current photovoltaic sector.

Of course with this it can not be deduced that all solar panels manufactured in China and / or all manufactured in Germany will give this result, but there is no doubt that if it is a valuable report as a basis for meditation before deciding which materials we will use it in an installation and what is the correct way to analyze its profitability.

After the data thrown in with this actual experiment in operation, do you still think that it pays to save a few euros on a cheap solar panel and not invest something more in quality?

Report developed by the technical department of SunFields Europe