Made in Germany, maximum quality, the best solar inverter in the pv market

Our company works with the distribution and sale of SMA inverters as well as offering technical support to solve any doubts that may arise with the installation and configuration of pv systems.

SMA is the largest and best solar inverter manufacturer with great sales volume worldwide, and with a proven reputation in the photovoltaic sector. SMA Solar Technology develops and manufactures high-efficiency inverters for pv installations of any size.

Together with the solar panels, the inverter is the most important technological component of any photovoltaic project, since it converts the direct current generated in the cells of the photovoltaic panels into alternating current suitable for the network, either for self consumption or for injecting into the public grid. SMA inverters now offer important network management functions which, due to the increasing production of electricity with renewable energies, play an increasingly important role.

Do not hesitate to contact us if you need a quote or technical support to calculate your installation with our SMA inverters.

The most important characteristics of the solar panels inverters are specified by its nominal input voltage, its nominal power, its efficiency and the type of signal it generates. The efficiency of the photovoltaic inverter is a parameter of great importance, as it indicates how it behaves for power levels other than nominal, ie when the load that is connected to the inverter is not the nominal.

In the picture we can see the typical curve of variation of the efficiency of solar inverters SMA Sunny Boy SB3000 in function of the generated power. 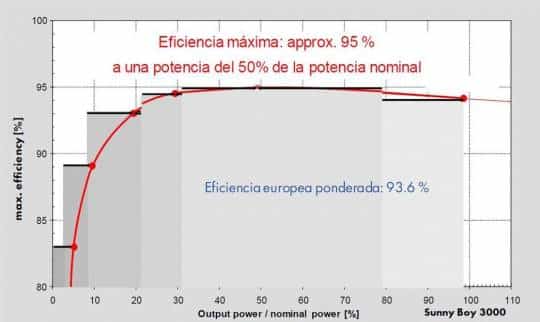 With respect to efficiency, what distinguishes mainly some inverters from others is the behavior at low power. This behavior is easy to understand if one takes into account that, in addition to the losses that may exist, the inverter needs to consume a certain power to carry out the conversion process. Another important parameter of photovoltaic inverters is the overload capacity.

The inverter must be able to handle a power several times higher than nominal for short periods of time to allow current points originated, for example, during starting of motors. A final note, which sometimes raises doubts, is the subject of the parallel connection of inverters. The inverters can be connected in parallel to the output, ie on the AC side, up to a maximum number indicated by the manufacturer.

This parallel connection increases the electrical energy exported to the grid. However, it is not usually possible to connect in parallel on the DC side, since it would prevent the proper operation of the MPPT, which involves each inverter and the module (s) to which it is directly connected. As far as autonomous inverters are concerned, parallel connection to the input is always possible, but the parallel connection at the AC output must be approved by the manufacturer. Of course, grid-connected inverters, such as SMA inverters, generate a pure sine wave at its output, compatible with the grid.

Despite being carefully constructed, electrical equipment, such as SMA inverters, can cause fires. Some of the basic precautions we must take when installing a solar inverter would be:

In any case, any doubts that you may have for a correct installation of your SMA solar inverters can contact us, and also to make you arrive budget for your project.