In a photovoltaic installation with solar panels, one of the things we must fear most and avoid everything is the effect of hot spots. The following is an analysis of some of the most common causes and the consequences they can have for a self-consumption, isolated or grid-connected solar pv systems.

What is a Hot Spot on a solar panel? 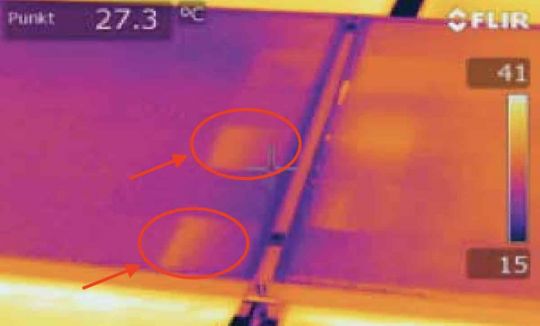 Hot spots are areas of high temperature that affect only one zone of the solar panel and result in a localized decrease in efficiency, and therefore, lower output power and accelerated material degradation in the area affected by the high temperature.

As we already know, solar panels generate energy and hot spots can arise when, for a number of reasons that we are going to see, some of that energy is dissipated, rather than generated, in a localized area. It is as if the solar cells in the affected area were consuming energy instead of generating it.

In addition, to top it all off, hot spots are generally unstable and will usually intensify until the overall performance of the panel is eventually nullified.

Why do hot spots appear?

The reasons for the appearance of hot spots are multiple and can be classified into functional or operational.

Functional reasons can be divided into two areas:

The operational reasons for the hot spots are related to the design and operation of the photovoltaic installation, and may include:

The effect of sand on the edges, a forgotten problem: 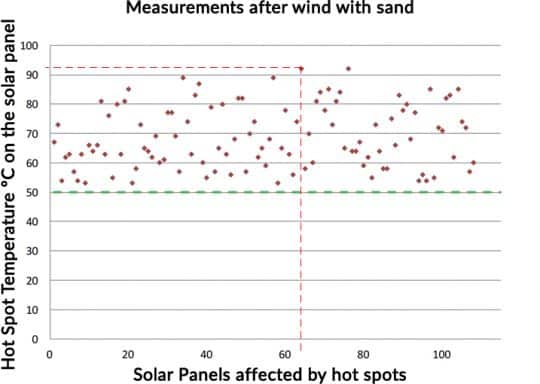 In the graph of the previous image we are seeing the measurements made on a photovoltaic project of self-consumption after an episode of wind with sand in suspension. 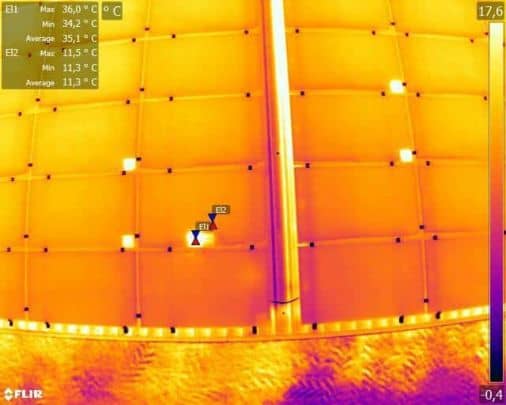 In this other image we see another very clear example of how the accumulation of dirt affects the cells located at the corners of the panels. If we look at the image, taken with a thermographic camera, we see that many of the cells in the lower right-hand corners of the panels are at a much higher temperature than the rest, generating a hot spot that if not solved in time, can end up causing problems.

In the next following image we see the same image but without a thermographic camera and we can clearly see what we are saying about the accumulation of dirt in the corners. 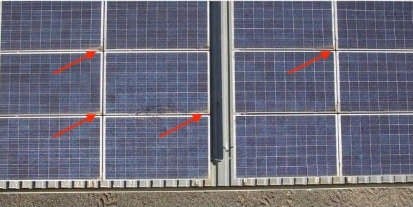 The accumulation of dirt can have dramatic consequences on the proper functioning of the photovoltaic system, as well as its operability. To this end, some of the solutionswould be:

As we have seen, the causes of hot spots on photovoltaic panels are varied and in most cases can be avoided. Choosing a quality solar panel, with built-in drainage corners and trying to avoid shadows, will ensure almost no incidence and enjoy a photovoltaic system at full capacity.